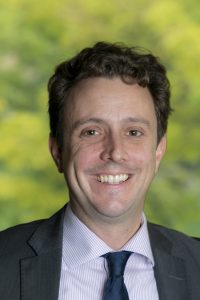 Dustin Brown joined the legal writing faculty in 2018 after nearly a decade in private practice, most recently with Godfrey & Kahn, S.C. in Madison.  He has litigated in state and federal courts in matters ranging from defamation, public records access, and electoral redistricting to insurance coverage, products liability, and deceptive trade practices.

From 2009 to 2011, Professor Brown clerked for the Hon. John M. Walker, Jr. of the U.S. Court of Appeals for the Second Circuit in New York, and the Hon. Thelton E. Henderson of the U.S. District Court for the Northern District of California in San Francisco.  He began his legal career at Bingham McCutchen, LLP in San Francisco.

Before practicing law, Professor Brown worked as a reporter for a chain of weekly newspapers in Queens, New York, and he taught English in Quito, Ecuador.