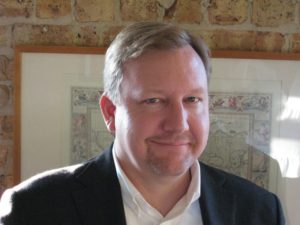 Karl Shoemaker is Associate Professor of History and Law. He holds a PhD in Jurisprudence and Social Policy from the University of California, Berkeley, and a JD from Cumberland School of Law. He is a legal historian, with particular focus on pre-modern legal traditions. His research and teaching interests include the history of criminal law and punishment, and historical and philosophical approaches to the institutions of modern criminal justice. He is currently an Associate Editor of the Journal of Law Culture and the Humanities. In 2006-07, Professor Shoemaker was a member of the Institute for Advanced Study, Princeton. He has also held fellowships from the National Endowment for the Humanities and the North American Conference on British Studies. He is currently working on the history of the right to sanctuary as well as a set of medieval texts which imagined the devil as a litigant. Recent publications include (with William Courtenay) “The Tears of Nicholas: Simony and Perjury by a Parisian Master of Theology in the Fourteenth Century,” Accepted by Speculum (forthcoming, 2008); “Revenge as a ‘Medium Good’ in the Twelfth Century” in 1 Law, Culture, and Humanities, 333-358 (2005); “The Birth of Official Criminal Prosecutions in American Law” in Rechtssystem im Vergleich: Die Staatsanwaltschaft (2005), The Problem of Pain in Punishment: A Historical Perspective,” in Pain, Death, and the Law (A. Sarat, ed., 2001); and “Criminal Procedure in Medieval European Law: A Comparison Between English and Roman-Canonical Developments after the IV Lateran Council,” Zeitschrift der Savigny-Stiftung für Rechtsgeschichte – Kanonistische Abteilung (1999).